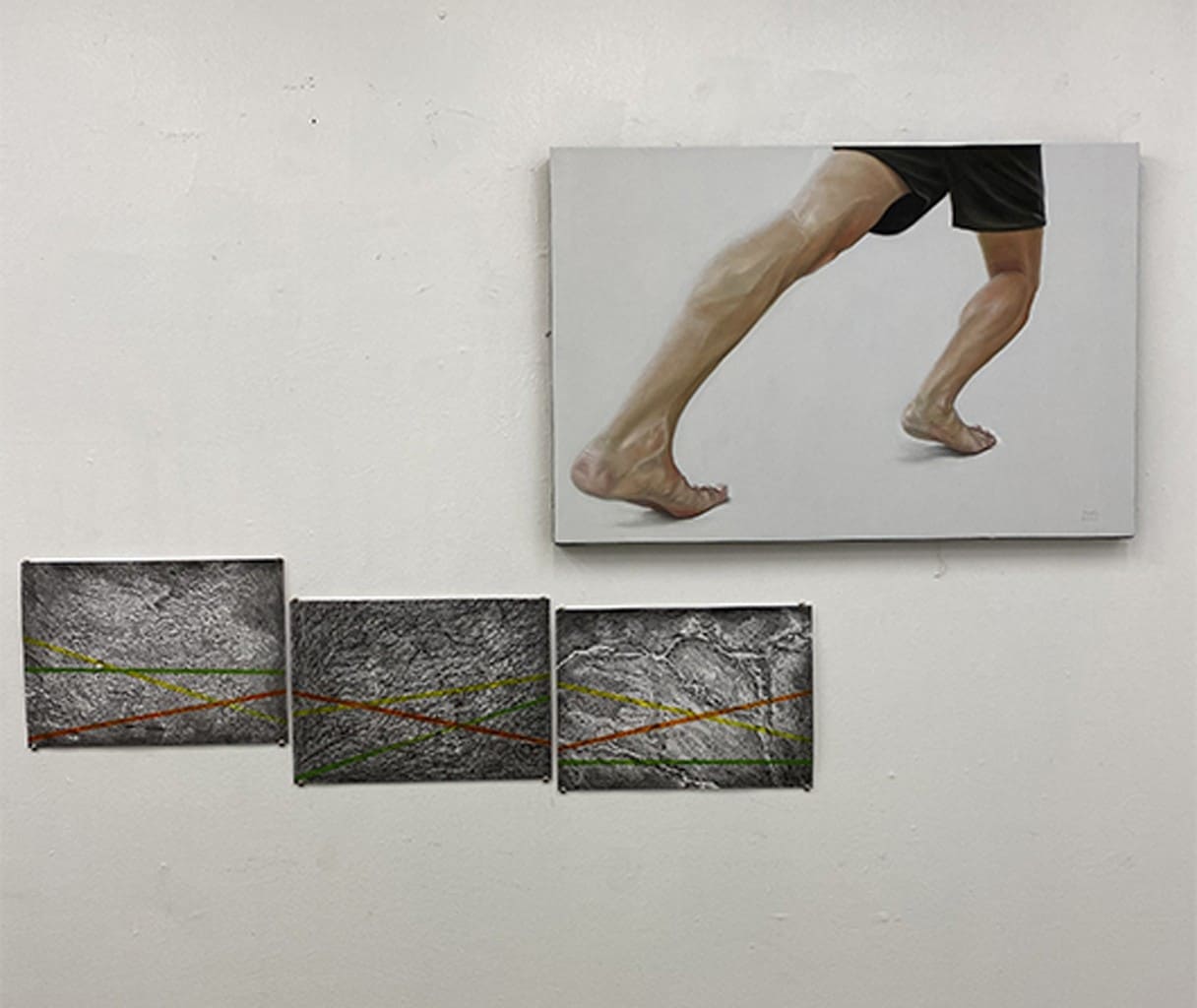 Running is arguably the most accessible form of bodily propulsion. Except in the form of sports such as long-distance running or marathon, it takes little to no preparation. One only needs to tie one’s shoelaces and go. (In fact, there’s a subset of runners who venture out into the world unsoled.) Embedded in our DNA as the instinctive flight response, running has immense benefits not just physically. Well-documented studies show that it is the cheapest—and safest—form of anti-depressant. In some cultures, running is part of spiritualistic rituals and ceremonies.

In her solo exhibition, Forging Ahead, Ranelle Dial puts this sport, exercise, or what the artist calls as “moving meditation” as the main subject of her works, extolling it for its own sake: the body’s ability to traverse point A to point B with intentional speed. In the suite of oil-on-canvas works, called “Forward Forever,” a pair of legs is shown in various states of movement, from the preparatory lifting-off to a full-throttle gallop. With the paintings’ sharp focus on the legs—the veins and ankles furious and the muscles of calves powerfully tensing-the artist has opted to present the runner in their universal form, even eliminating the particularities of a background to fully center the viewer’s attention on the energy, speed, and vitality of running.

Her self an avid runner, Dial sees running as an incremental form of making progress, especially in the light of a pandemic that curtails various forms of mobility and threatens the health of many. In such a period of indeterminacy, Dial finds strength, hope, and positivity in running, how it can restore our belief in the capabilities of the human body, bring perspective on what we can do individually and collectively, and offer the opportunity to transcend various forms of crisis, both actual and symbolic.

Complementing this series of oil-on-canvas paintings is a collection of works on paper, titled “Fartleks,” which, according to Dial, are “landscape sketches of roads where I usually run.” These paths are overlapped with multi-colored bands simulating motion tracks, directional trajectories, and speed measures (the warmer the color, the faster the speed). Metaphorically, they also suggest the triumph of the body over the immense grids of the city, how the propulsion of running can stamp intractable, though most of the time invisible, marks on the urban landscape.

Forging Ahead is a timely and powerful invitation to “move forward, keep going, and make progress. ”It’s a resistance against fixity, inertia, and stasis, especially in this age of COVID-19 in which the certainty of the world hangs in balance. Running, for Dial, is a way to take control not merely of our bodies but also our future: after all, running compresses and moves time forward. No matter how short or long the distance covered, progress is achieved. The exhibition echoes the thought of the novelist, and runner, Haruki Murakami who states: “Running day after day, piling up the races, bit by bit I raise the bar, and by clearing each level I elevate myself. At least that’s why I’ve put in the effort day after day: to raise my own level.”