Etiquette authorities have long advised, “Never discuss politics or religion in polite company”. However, with over 13 million confirmed Covid-19 cases and almost 270 thousand deaths in the United States as of this date, in the midst of a chaotic environment fueled by race-related protests and the recent election, politics and religion have become the elephants in the room at any gathering, whether physical or virtual.

Pinky Urmaza has found herself navigating such debates amongst relatives, which had inevitably led her to confront her own faith. Specifically, in America, behavioral responses to the pandemic have a polarizing effect on society because stands are instantly politicized. For instance, some of the religious right disregard safety precautions, with the far right following a belief that Americans are God’s chosen and protected people, therefore ignoring scientific expertise and distrusting news media. The left, on the other hand, prioritize precautionary measures which some view as violating religious freedom and perceive as restrictions which unnecessarily exacerbate the economic downturn.

Most of Urmaza’s works consist of collaged paper taken from museum catalogs. She selected images of religious icons or tableaux, as she reflected more deeply into her Catholic upbringing and her internal struggle with the observance of how religion is being used for political gain. “Religion’s play into politics has exposed hypocrisy and cracks in the morals of people I used to believe in. It has made me see a side of loved ones that is difficult to accept: how we are failing to protect one another from the virus… It is unbelievable how there are some who are so misguided that they believe that their faith is enough to protect them.” Despite the closure of churches, surveys have shown that religiosity has risen as a means of dealing with uncertainty, grief and misfortune. Ironically, such phenomena were historically brought upon by existential insecurity like periods of wars and other disasters. For Urmaza, what came to mind were the words written on a wall shortly following 9/11, almost two decades ago: “Dear God, save us from the people who believe in You”.

These surrealist collages present human faces replaced with flora and fauna, the bodies also substituted with fragments of architecture or landscape. They are distorted or re-oriented into new realms of strange beauty. Some of them have emphasis on the eye, a common religious symbolism that represents providence and protection. Urmaza’s titles, largely biblical references, are disturbingly resonant today, with the onslaught of false prophesies and inaccurate predictions, the rise of bitter rivals, heretics likely unaware that their opinions are contrary to their church’s doctrines, and modern day parables illustrating ambiguous moral lessons. 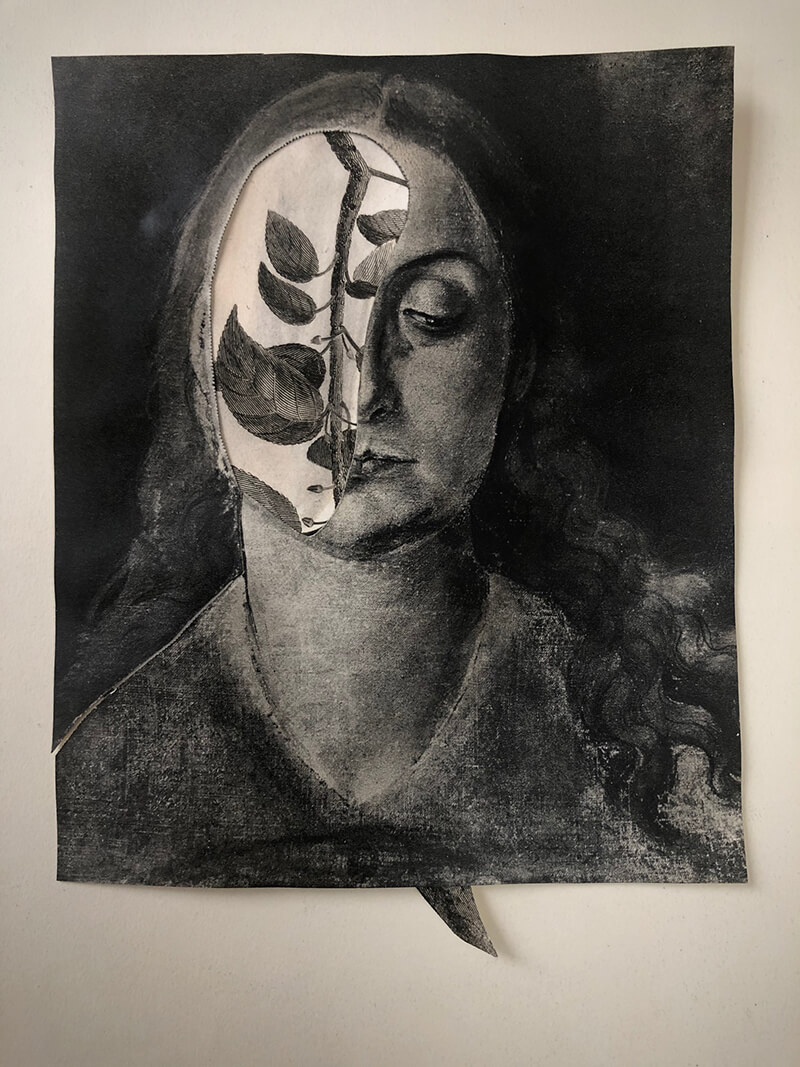 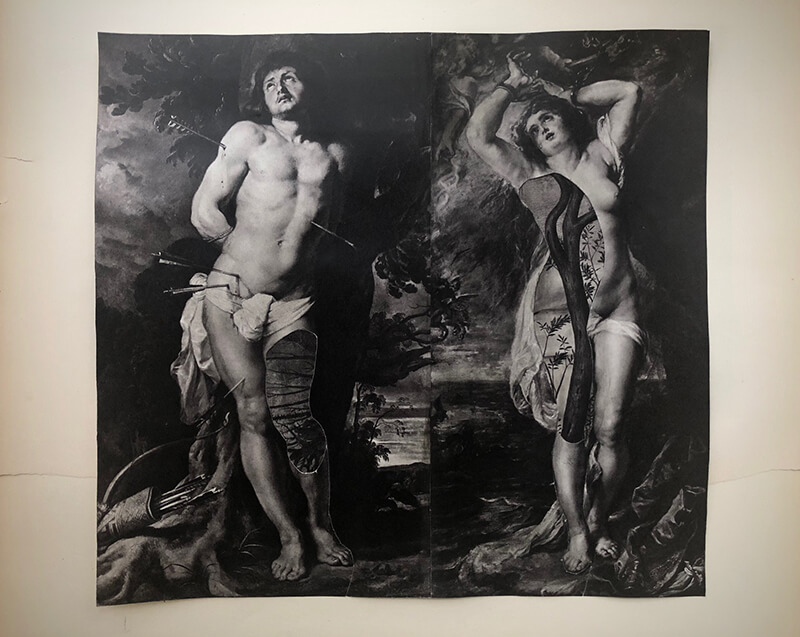 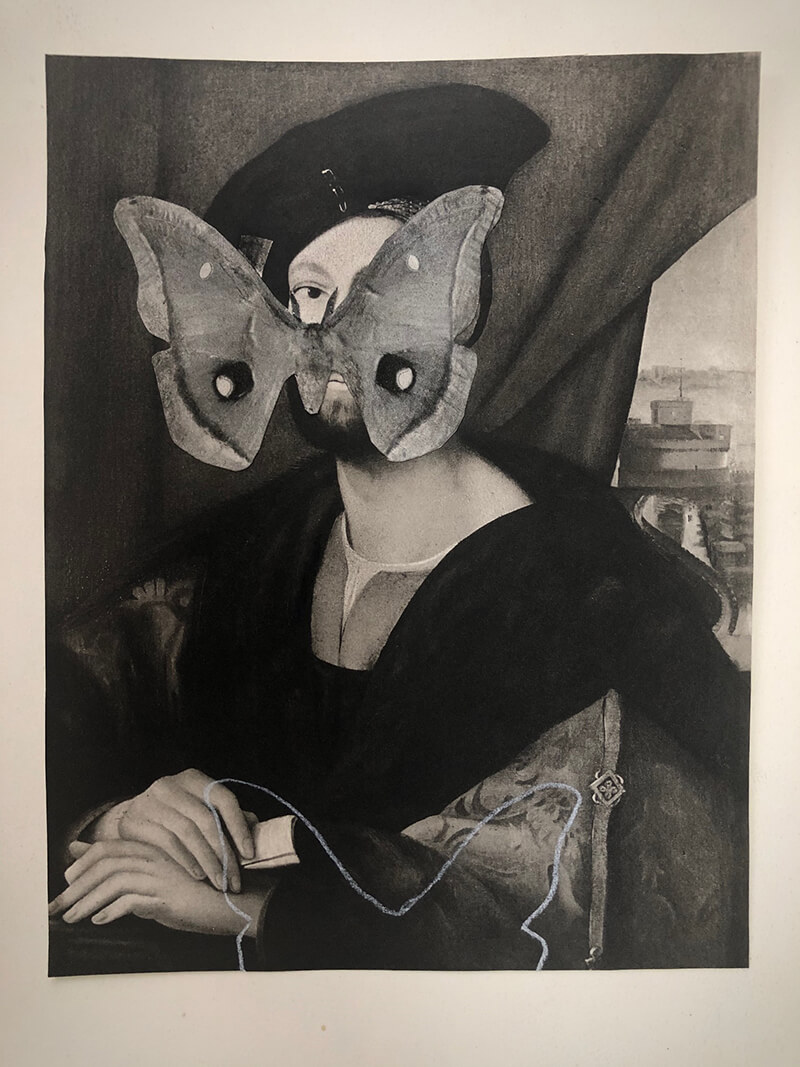 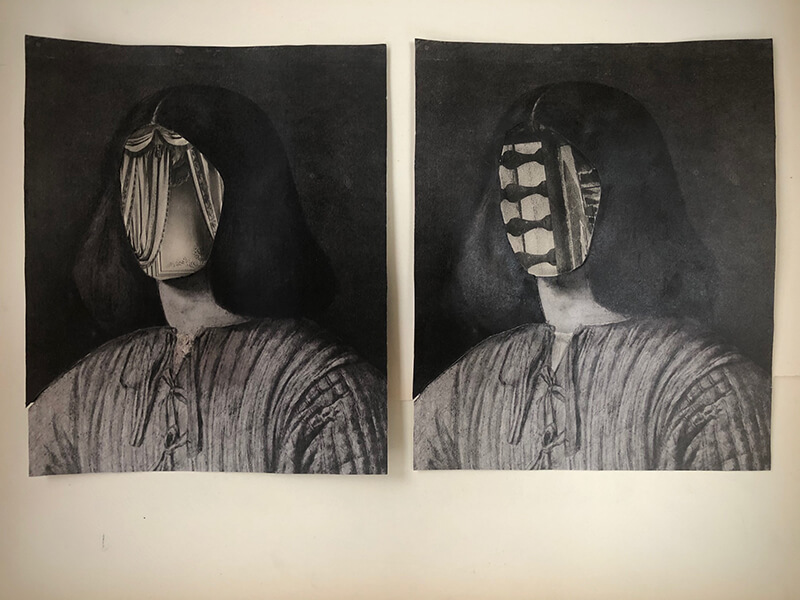 Many of these ideas are personified by Lilith — a female demonic figure said to be the first woman, made out of the same clay as Adam, instead of simply out of his rib, as was Eve. The mystery surrounding her is like the dearth of unreliable information and the origins of disinformation, exacerbated by social media’s proliferation of fake news. There is also the mention of blindness, in this case figurative blindness, as truths are concealed or as the apathetic choose to remain uninvolved.

The show explores the dichotomies that exist in everyone: dark and light, good and evil. Both the best and the worst in people have come forth during the pandemic. Yet these co-existing dualities of human nature that lead to conflict, are the same ones necessary for rebuilding, growth and rebirth. “It is my fervent hope that ultimately, good will prevail.” -Stephanie Frondoso.

Pinky Ibarra Urmaza’s work primarily involves collages. She selects found objects and fragments that are imbued with history, manipulates them through stitching, burning and other forms of mark making, and then thoughtfully collages them, giving them new contexts and inspiring viewers to imagine their own narratives.

Urmaza spent most of her childhood in her grandfather’s ancestral home, which had musty rooms filled with old books and encyclopedias that have been damaged by floods, humidity and time. She used to collect found objects from that old house—a childhood hobby that still greatly influences her work. She deconstructs books that have been weathered with age, hunts for vintage photographs and tintype portraits, and other ephemera such as old letters or game pieces. She carefully selects each object and researches about them, positioning them with much deliberation, every detail in place for reasons above pure aesthetics. Urmaza’s background in photography and film making has given her a very specific sense of composition, imbuing the collages with multiple meanings and allowing for individual responses based on the viewers’ own memories and fantasies.