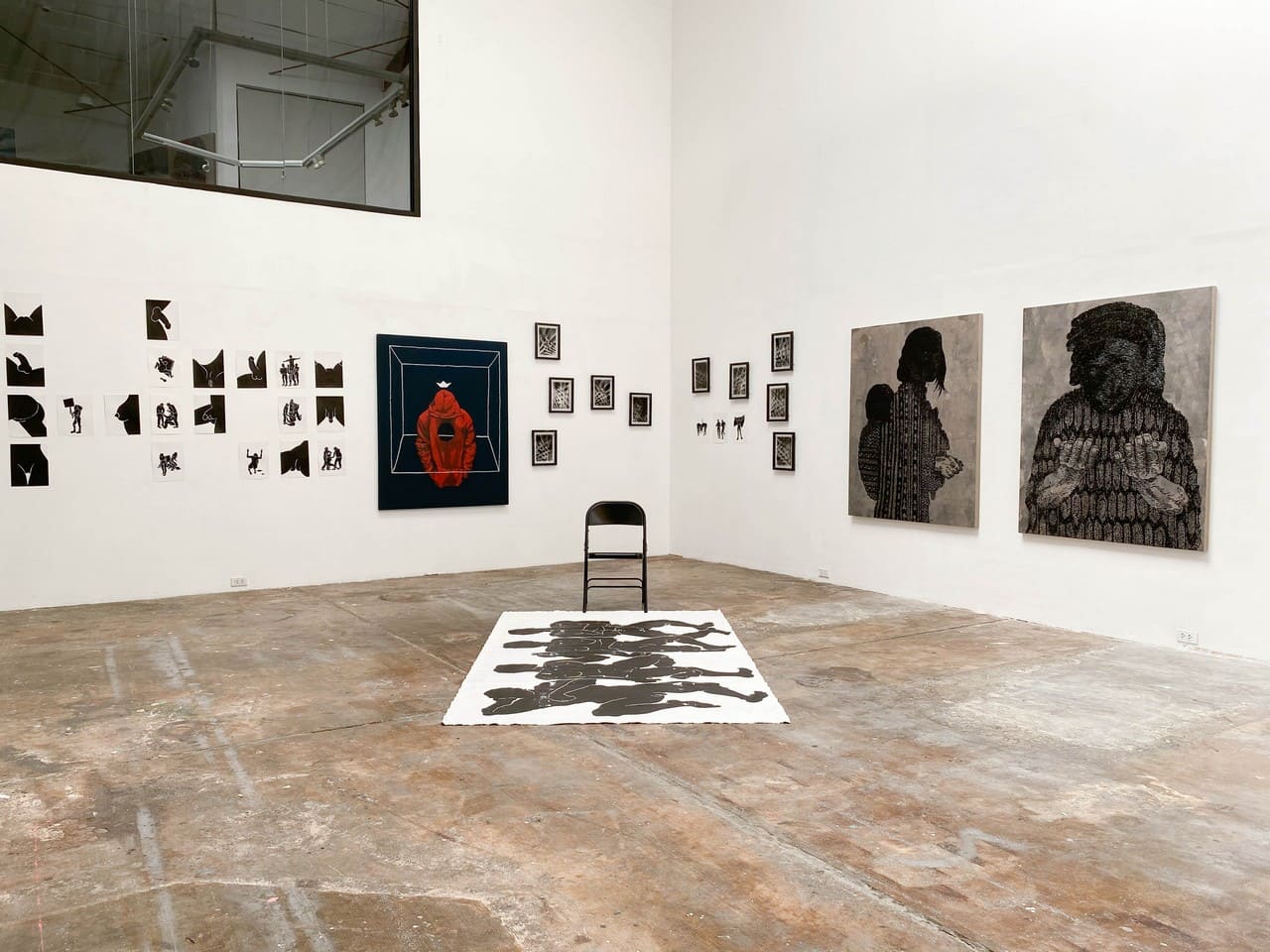 In Unusual Tranquility, artists examine the relevance of art making in today’s state of affairs, sourcing inspiration from personal experiences during the pandemic with astute observations, notes on survival, maintaining sanity and deciphering new codes. Collectively, pieces reference the body and how its journey goes from the personal to universal, how circumstance affects the artist’s psyche and prepares one for what might be bigger struggles ahead.

Dennis Bato’s multilayered layers of aerosol, acrylic and oil paint in blacks, whites and grays on wood with epoxy resin show how humanity exists by building on top of the markings of the past – be it earlier civilizations, previous regimes, social issues brought about by actions of the preceding generation, or even yesterday’s personal decisions. Paths converge on multiple planes, with what appears to be moving figures stuck in between. Haziness translates how current reality appears, where normalization pressed upon individuals by society and the powers that be blur the lines between the negative and the positive, the future remaining unclear.

Archie Oclos’ portrayal of indigenous people in his works takes on a more familiar route as he not only inscribes patterns on an individual figure posing in front of the viewer with arms outstretched, but also in the space occupied by a mother and child. As he fills these silhouettes with earthy textures and tribal designs which give life to his figurative illustrations, he chooses to give form to maternal love and their other sentiments. With one of his pieces showing hands that lead to the center of the piece, one questions whether the figure is pleading or offering, and whether we have given enough attention to their plight.

Roberto Sanchez, however, draws more from his philosophical leanings in his series of paintings about Amor Fati, or love of fate. He posits that since we cannot do anything about what is happening, the sensible tendency is to choose to love, trust and accept what transpires, whether it is to your advantage or not. His works feature a figure wearing a hooded jacket whose body language shows dejection, disappointment and betrayal, but he stoically embraces his fate as his own form of escape, to cope from unpleasant realities. Adding chalk outlines also plays on impermanence and the acceptance of possible loss.

For Anjo Bolarda, personal exploration of the body has resulted into works on paper investigating how the public has reacted to the pandemic. With the increase in social media use, not only are basic needs put to the forefront, but so is the desire to be seen and heard. The body, which has always been an instrument of self-expression, is taking on new creative channels showing gestures, action, dances and even skits in vlogs and short-form mobile video app Tiktok, which not only disseminate new, probably filtered concepts of beauty, but even overt sexuality and political leanings. Body language and its images, whether whole or in parts, offer new conundrums to be interpreted, and Bolarda shows these by assembling mixed codes of anatomical parts and gestures and even portraying identities outside the gender binary.

As we gather the pieces of our lives post-lockdown, the works in the exhibition remind us to be centered in our rootedness and not to be comforted by a false sense of security. It is better to be grateful yet wary, than be misled by baseless optimism. We might have gone through what we deem some of the worst times of our lives, but this serenity too, shall pass, and we should not be lulled in this calm before what just might be greater storms.