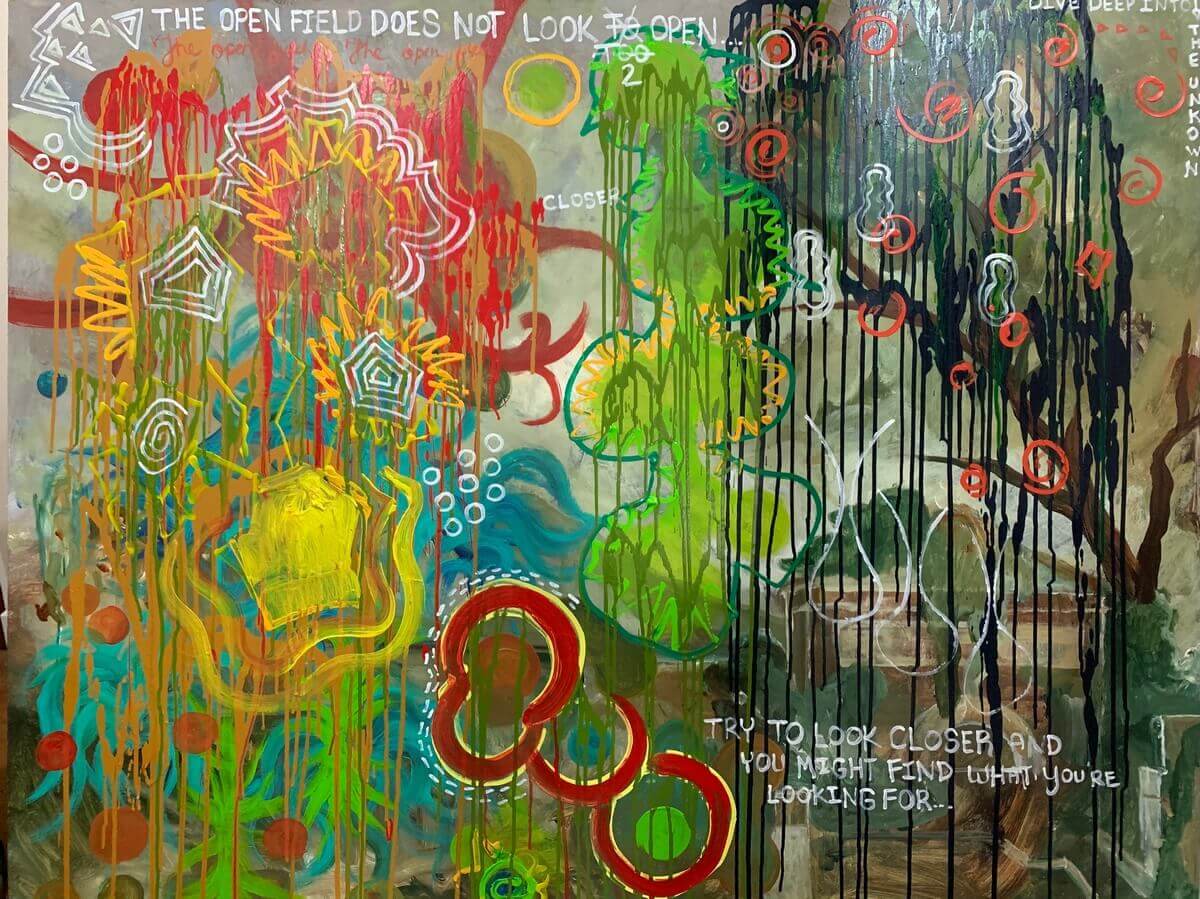 Hope And Dreams In Open Fields

In Hopes and Dreams in Open Fields, Alexander Lim unleashes the power of painting to visually portray enigmatic scenarios. Perhaps inspired by the constant presence of plant life on social media and possibly his own surroundings, he coaxes new meaning into invented shapes and forms spawned on his canvases, his imagined creations appearing strange and mysterious, yet imbued with a slight sense of playfulness and wry humor. Cryptic texts are interspersed with daubs and drips of pigment, with some words crossed out and replaced to express hesitation and blurry spots of communication when the eagerness to spew one’s thoughts sometimes leads to tripping all over one’s self with second guessing and self-judgment.

Anthem of Tomorrow is the illustration of a plant in a pot, yet we are not given the ease of familiarity in his four-leaf clover-angled sunflower-fading rose petals hybrid. The earth tones of his background peek through the seeming immateriality of his subject, as it appears as a phantom of melting, flowing green punctuated by white dots, triangles, prickly leaves and reverberating lines.

Garden Rules combine the vibrance of red pigment with deeper, darker tones that mimic dried blood and earth, obscuring an implied figure and separating texts, preventing them from forming a clear message. Orbs are both buttons and accent, bearing the colors of traffic lights that command one to pay heed.

In Die Fern, translated from German to English, means Into The Distance. Here, Lim sets up an entrance into a forest of unearthly delights, replete with floating ghouls and warnings. Though the artist fills in the spaces in between with shapeshifters that might appear as monsters to one’s sights, their ambiguity might mean that they are actually amiable creatures that lead visitors further into the heart of a jungle filled with fantastic flora. Admonitions may be advise or merely wishful utterances. New Gateway features a pod as a central shape.

It appears to protrude as a seed teeming with life and promise, with surrounding elements vibrating to sounds unheard, perhaps in preparation for an opening to burst forth. Bewildered Portal appears closest to being anthropomorphous, though its lack of facial features and frog-like limbs make it alien in our personal repository of biological forms. 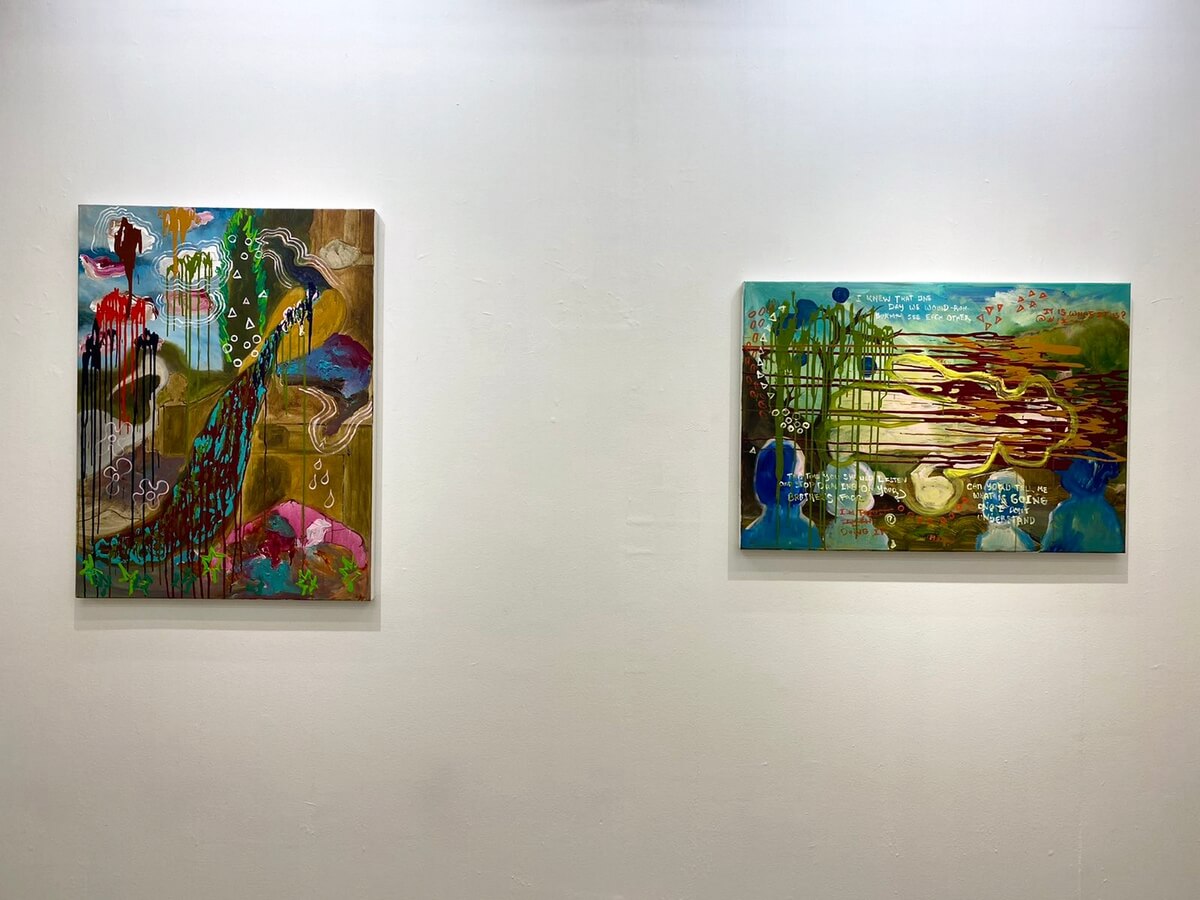 It sports a hollow center where one might be able to pass through, though distortion seems to be a possible consequence of doing exactly that. Its hands carry ornamental tendrils of blue and red, which may be dripping leaves, vines, or blood. Dashboard Conversations features two pairs of subjects on each side of the painting, with a floating figure laid across them. Though we may eavesdrop, their dialogue remain privately theirs, as their words range from hope to confusion to instruction and hints on being excessively didactic.

Alexander Lim’s works invite audiences to look closer, if only to quieten the bewilderment that one might experience at first glance. It seems each squiggle, streak and drip (which always directs the eye’s journey towards the ground, re-/im-planted) is meant to provoke and question the boundaries of one’s imagination as they stretch the shapes and colors of our reality, bringing our expectations where they are rarely seen– in the open, exposed, fielded with barrages of forms and shapes that seem to not make sense, but in the artist’s mind, do. 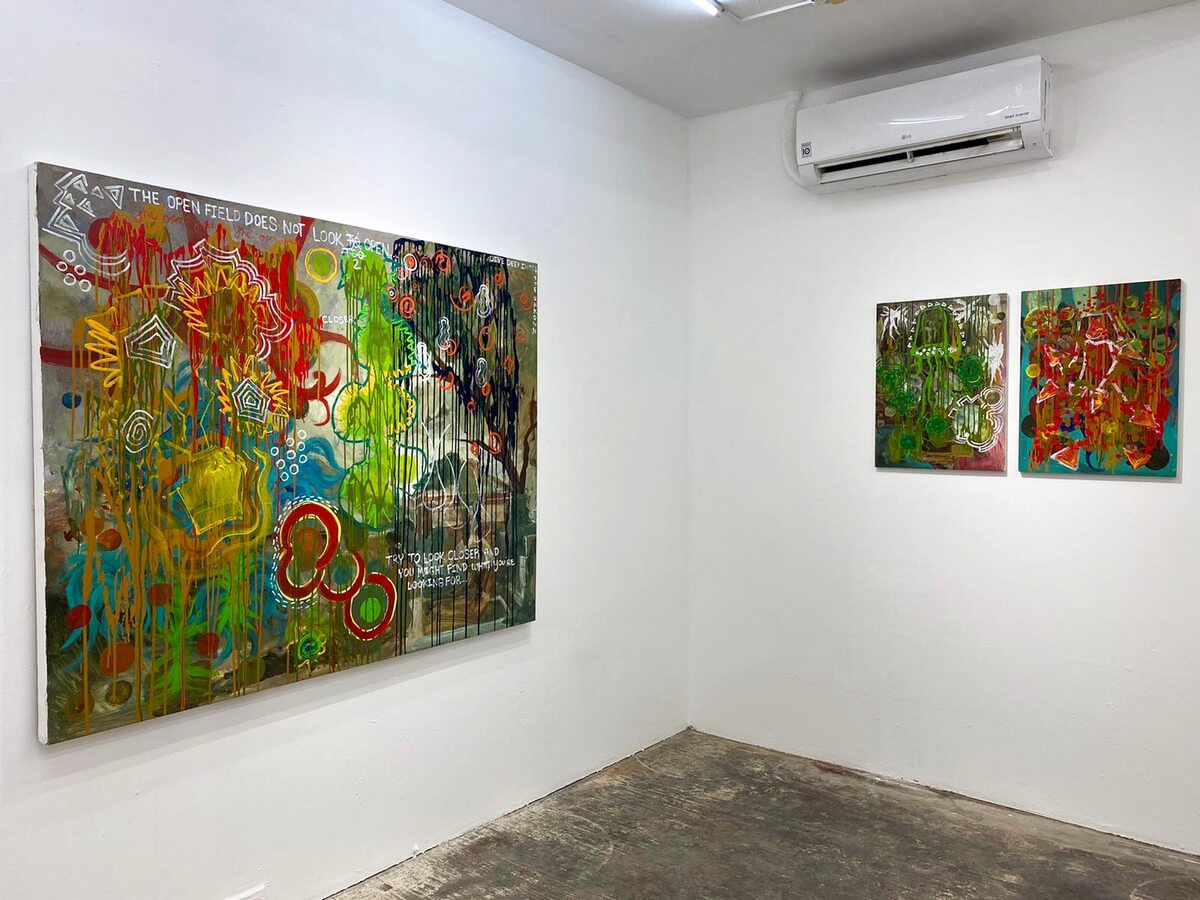 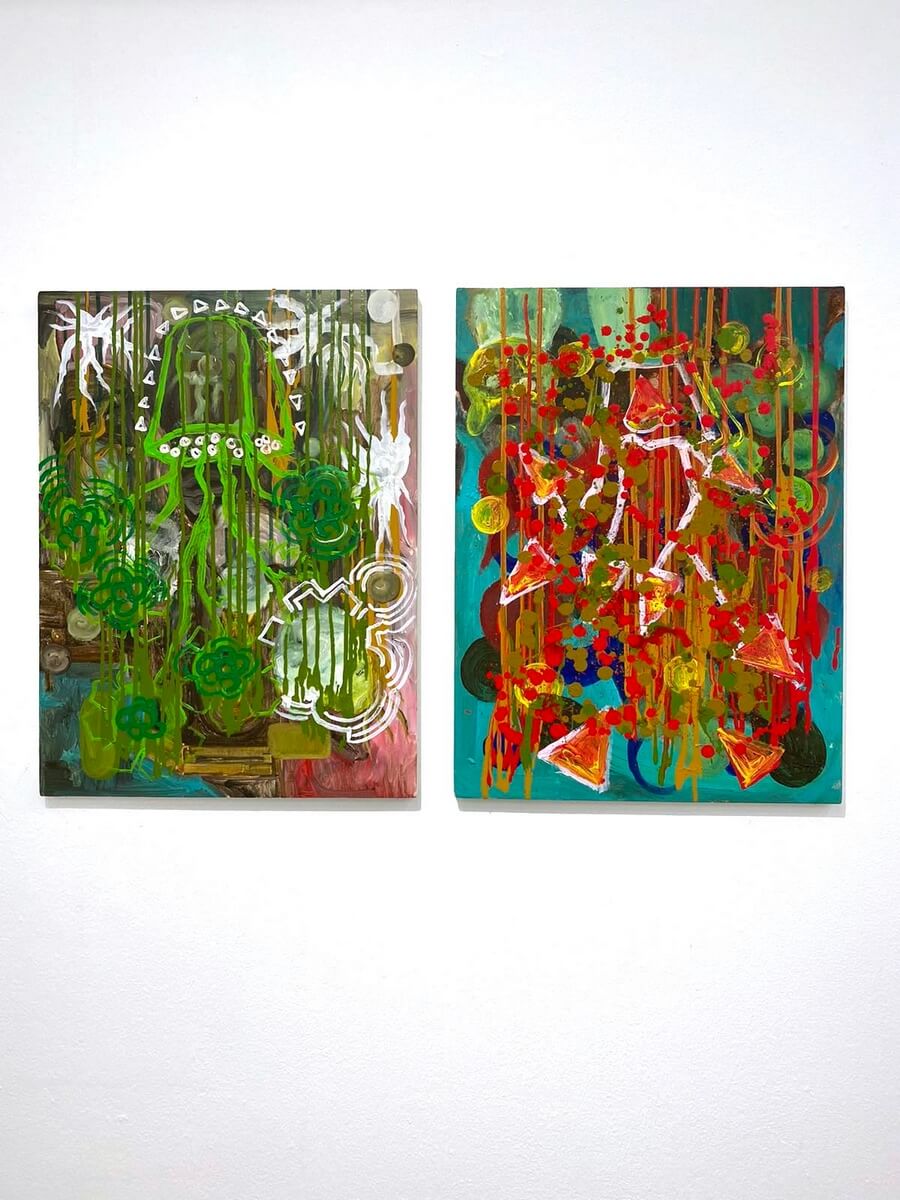 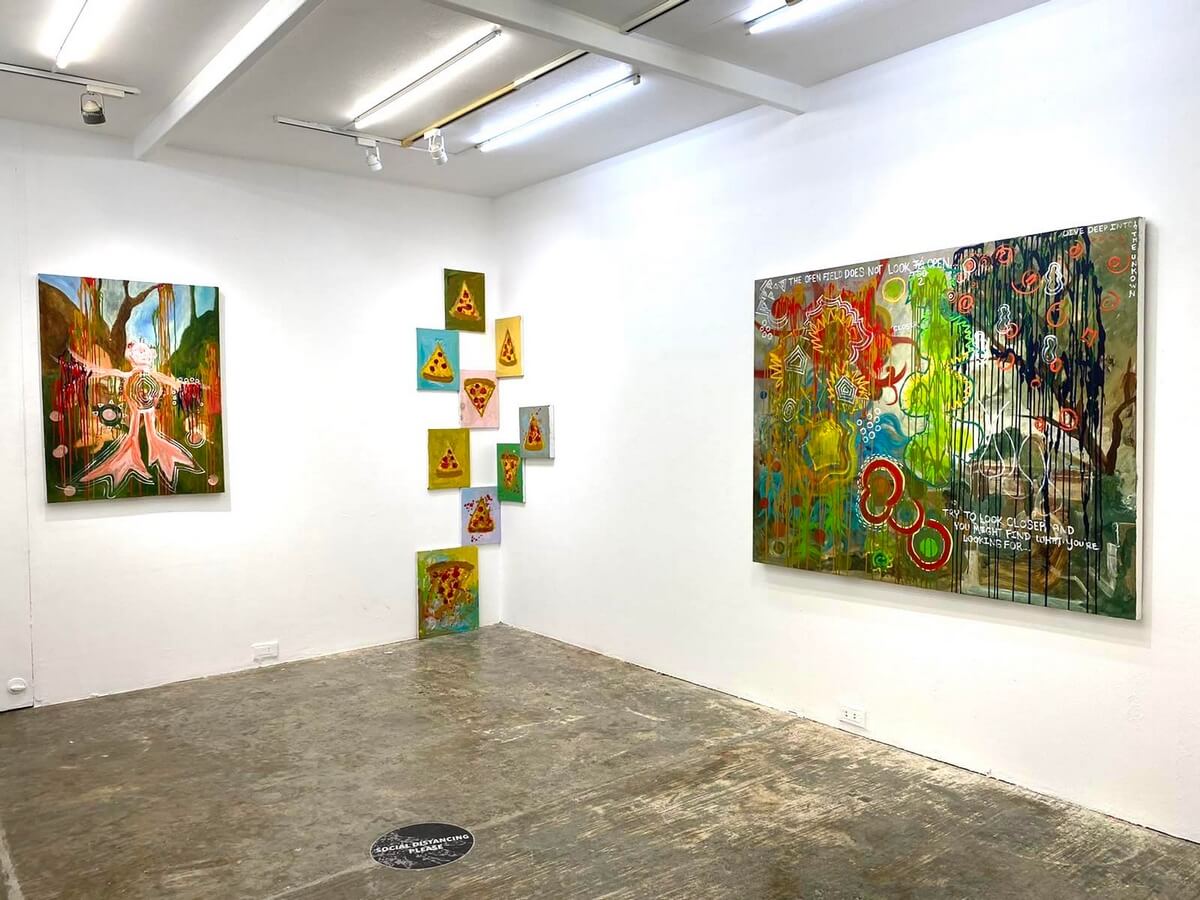